Careless Builders Can Cause Hidden Problems

I had to commission opening up of a flue this week. The building had just had a chimneystack rebuilt as a result of severe sulphate attack and initially I was not happy with the chimney caps and ordered them to be removed for inspection. What I found was a flue that appeared to be blocked with loose and wet masonry debris to a point approximate to about 3/4 of its height. It appeared that the debris had lodged on the shoulder of the flue where it changed direction so my initial thoughts were to open up the base of the stack and simply rod the loose debris through until it fell to the base where it could be removed. Surprisingly the chimney was fully blocked to 3/4 height and I have no idea where all this debris came from. Some undoubtedly ended up there from careless taking down of the stack but the rest is a mystery. We ended up opening the flue up in several locations in order to clear the debris.

Whilst the chimneystack is no longer in use, it requires careful decommissioning to ensure that a robust through flow of air is maintained top to bottom. In our case we have installed a concrete cap and will be installing double air bricks both to the base and the head of the chimneystack. Interestingly we are at the back end of a large refurbishment of the external facade resulting from recommendations I made to deal with severe penetrating damp in this residential care home. Walls had severe penetrating damp due to a failed cementitious render system and failed chimney stacks. The bedroom wall serviced by this stack is fully saturated and did not stand a chance of drying out until this debris was cleared from the flue.

I genuinely believe that the builder responsible for throwing debris into this flue did not realise the implications of what he was doing; to him it was just a free skip and I’ve seen similar problems where builders compromise subfloor ventilation by also throwing debris into the subfloor void. A word of warning, if you do have stacks rebuilt, particularly where they are not in use, then check your flues are clear afterwards. 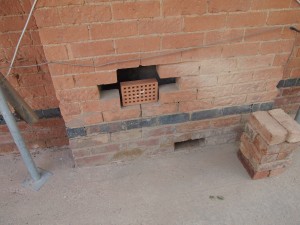 Installing clay airbrick to ensure a robust through flow of air