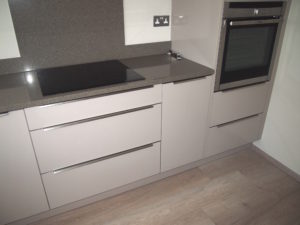 Following on from our recent blog on investigating sulphate attack in solid concrete floor slabs; what we didn’t mention in that blog was that we got the lab results back, which proved what we suspected, that there were incredibly high levels of sulphates in the hardcore material and the failed concrete floor slab. What subsequently transpired was that the client asked us to tender and project manage the remedial works. Works were specified and put out for quotes to local building contractors; interestingly the spread in pricing was quite staggering, ranging from £15k to £36k. We got four quotes back before the client made a decision on who to award the work to.

Works are still ongoing and due for completion on August 19th but things are progressing incredibly well and the most complicated aspect is possibly the careful removal and refitting of a very expensive kitchen with Granite worktops. There is also a Bathroom to strip out and refit, a shower room and built in wardrobes in the bedroom. 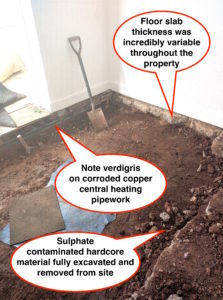 We mentioned in the previous blog on this subject that we believed that leaking subfloor heating pipes had contributed towards accelerating the sulphate attack and indeed as the floors were excavated we noted a number of heavily corroded and leaking copper central heating pipes. These will all be cut out with new pipework runs being installed above the finished floor level.

Since the hardcore material was heavily contaminated with sulphates then it was critical that this material was excavated back to ground level and removed from site. We’d envisaged a slightly easier excavation process for the concrete since the original sampling area showed the concrete to be incredibly thin, however, the concrete proved to be circa three times thicker in some areas and showed a massive variance in thickness throughout the property. 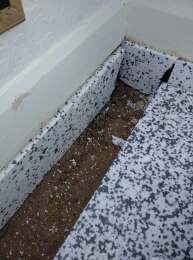 The local authority inspector had his first inspection last week before the first concrete pour and was very pleased with what he found. You can see the Jablite polystyrene insulation and Jablite perimeter upstands, which of course are only installed to the external perimeter walls. The builders are fairly old school and are mixing the concrete on site as they go. The final image shows works well under way to complete the large section of flooring to the lounge.  In fact the lounge is now complete and is currently being used as a storage area for the kitchen and bathroom fitments and furniture. Works to this property are being completed under a CIOB Mini form of contract (general Use), which to my mind is far more suited to a project of this size than a JCT minor works. 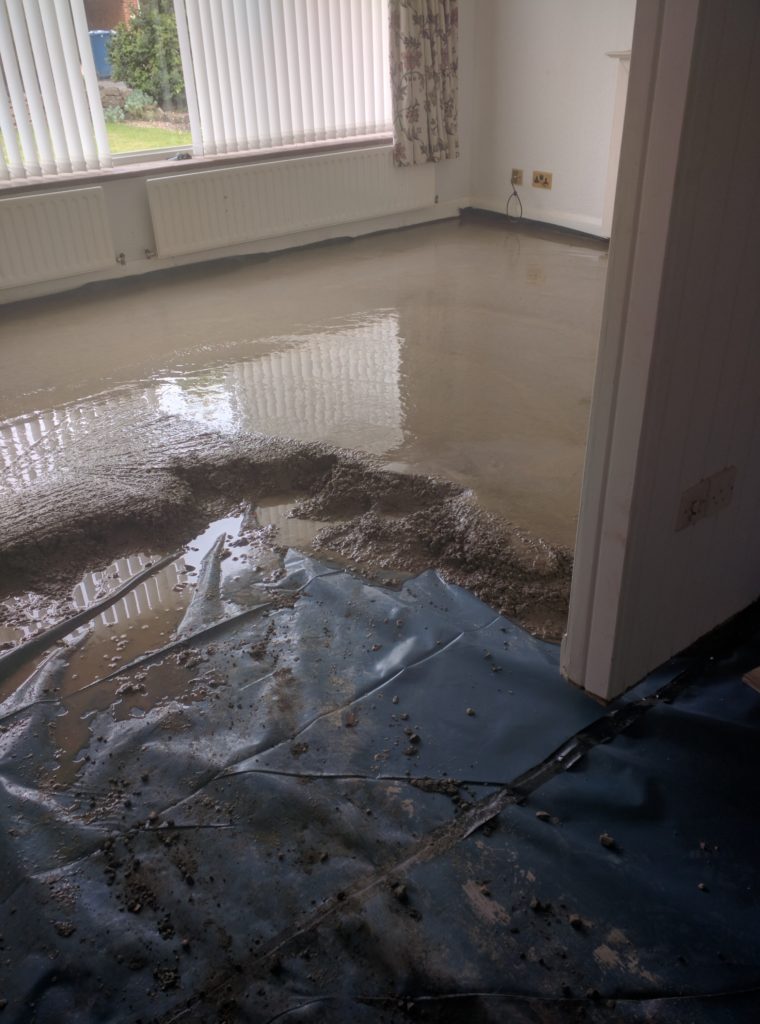 Concrete being poured over 1200 gauge DPM