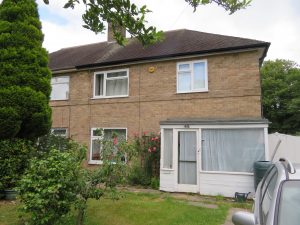 On a recent visit to inspect a property we noted frost damage in clay roof tiles, which had spalled and delaminated, all obviously caused by freeze/thaw action.

Damaged caused by frost (or frost attack) is the process through which water enters the porous structure of a tile. When the water freezes, the volumetric expansion of the water causes internal pressures within the tile that lead to it crumbling or spalling over numerous wetting cycles.

It would be beneficial to consider the typical weaknesses of the clay tile, its susceptibility to frost damage and the mechanism leading to its failure. One of these involves the incipient features of the manufacturing process. During the course of kilning and cooling, the clay tile will develop a hard outer ‘fire skin’ that resists the factors of deterioration and will maintain the integrity of the tile. It is by no means an imperishable layer and once the hard outer ‘fireskin’ has been lost, water is able to penetrate into the softer, more porous part of the tile, which accelerates the delamination process. In this particular case delamination was so far advanced that tiles were completely disintegrating to a number of areas. 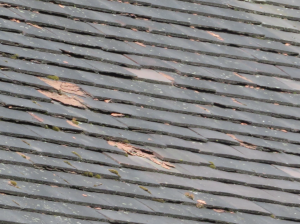 Clay tiles delaminating so badly that they are now disintegrating

Whilst all tiles will eventually become susceptible to damage over the passage of time, the
rate of failure for clay tiles depends on a number of factors:
1. The temperature that they were fired in the kiln. By using tiles that were in a cooler part of the kiln or were exposed to air before the process had ended, will mean that the clay will not be fully vitrified, leaving large air gaps between the shaled surfaces which, when exposed to freeze/thaw action, are brittle and cause the surface of the clay tile to delaminate.
2. The roof exposure. For instance, we noted that delamination had occurred to significantly higher levels on the north elevation of the roof.
3. The pitch of the roof. Steeply pitched roofing being less susceptible.
4. Detritus and surface contaminants will also have an impact on the rate of failure of clay tiles – a roof that cannot shed water quickly may retain moisture which results in water penetrating the inner skin of the tiles which in turn allows frost action to occur. 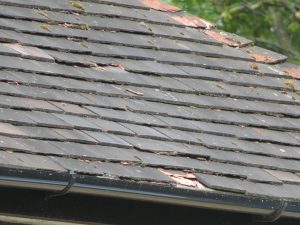 In this instance, there have been jobbing repairs carried out, as and when required, which is evidenced by the mismatched colour to a number tiles, which were previously renewed. We could feasibly say that the roof can be maintained in this way moving forward but pragmatically it’s apparent that even when damaged tiles are replaced, there is a strong possibility of ongoing frost attack to other existing tiles.

Is it cost effective to carry out jobbing repairs in this way, or should all the roof tiles be renewed? As a general principle, if spalling had occurred to tiles over 15% of the roof surface area then there has to be strong justification for complete renewal of the roof tiles. In this case, spalling and delamination affected no more than 5% of the tiled surface area. Considering the cost of access equipment required for individual repairs it would be easy to see how a number of individual repairs could quickly exceed the cost of a new roof over a given period of time. It may be in the homeowner’s best interest to completely retile the roof, which whilst expensive in the short term, may offer a proportionate saving in costs over an extended period of time. However, you can simply explain this cost benefit analysis so the client can  make their own informed decision on the best course of action, but you must be clear on the risks… a choice to repair, will not rule out further spalling of other existing tiles.