Cementitious Render Failure: Causes of Failure in External Render & What to do About it.

This will be a two part blog. In part one I shall discuss the causes of render failure and in part two I’ll cover remedial action. 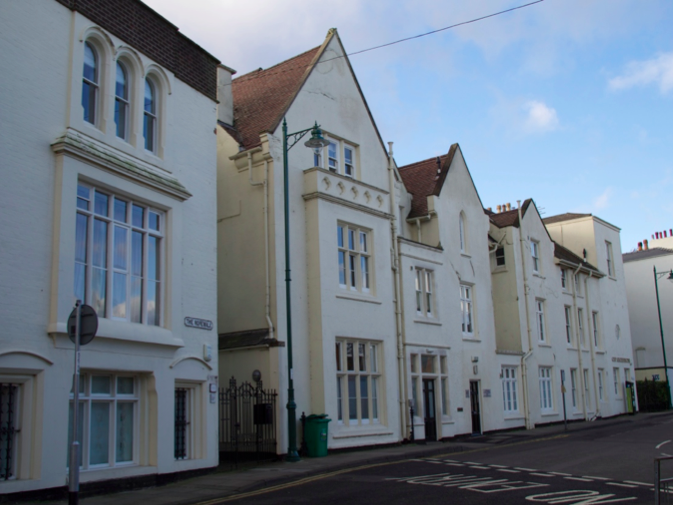 Sometimes you get a run of particular problems to investigate, if two in a week can be considered a run. This week I was asked to investigate the cause of render failure on two separate buildings, one in southern England and one in the Midlands, though technically the Midlands building had already been investigated by a Chartered Surveyor. What I was actually asked to do on this building was to quote for writing the works specification and project managing the works. However, I was less than convinced at the previous surveyors conclusion that the render had failed due to ‘wetting.’  It was a vague conclusion that was of little use in understanding what specification was required so I went to see the building for myself.

Before I move on to the issues affecting each building it may be worthwhile outlining some general principles relating to the application of cementitious render.

Why do we render buildings?

Cementitious render  is applied to buildings for a number of reasons:

Please bear in mind that we are not discussing EWI systems so improvement in the buildings thermal value is not a significant consideration.

Render is mixed to a particular mix designation according to what is suitable for the background to which it is being applied, so you will only understand what specification is required after assessment of the building. It generally contains OPC mortar, a fine aggregate and possibly lime. Mix designations range from class i (Strong, relatively impervious with high drying shrinkage) to class v (weak mix to be used on weak backgrounds in sheltered locations).

I’ve previously discussed how mortar should always be weaker than the masonry units it holds together and similarly, OPC based render should be slightly weaker than the underlying substrate. This means that the  render mix proportions must be compatible with the underlying substrate. For instance you would not apply a class i mix designation to an old building constructed  with lime mortar, yet this is precisely what we see on many many occasions.

Rendering is generally applied in two or more coats, with the first coat being 9-13mm and the second or subsequent coats being thinner. However, the batch mixing must be consistent for each coat. There are some specially mixed renders that can be applied in single coats but where we see single coats, there is generally nothing at all special about the mix and this is generally a factor in its early failure.

In specifying render  you need to consider a range of factors:

You will need to consider a number of factors relating to the underlying substrate and should give thought to:

When applied the render should be fit for purpose, meaning it should both look good and provide adequate weatherproofing. It should also be highly durable and have good adhesion with the underlying substrate.

What Causes Render to Fail Prematurely?

Sometimes the fundamental cause of render system failure is not immediately obvious and in such cases we may even send off samples of the render to our laboratory for SEM (scanning electron microscope) testing or indeed a range of other tests. However, in most cases  the cause of failure can be established during the site investigation. During the site investigation we assess the following range of factors: 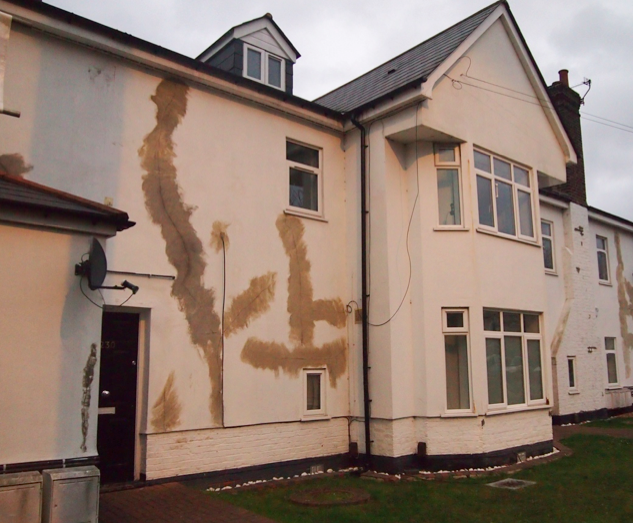 Our first building relates to a substantially extended property in the south. The originally building had 225mm solid brick walls laid in Flemish bond. The building then had cavity walled extensions built on at either side of the property approximately 8 years ago. The brickwork was substantially mismatched so an external cementitious render was applied, primarily for aesthetic reasons.

Interestingly works had commenced to repair the render system and the contractor was midway through works when the alarm was raised with regard to potential wall tie failure and an alleged concern that this might be linked to failure of the render system. In fact there was no evidence of structural issues or wall tie failure but these concerns had stopped works until the alleged issue was addressed. The contractor has cut through all cracks in the render on the southeast and southwest elevations to open up the crack and provide a better key for the repair mortar and it was at this point that we inspected the building. 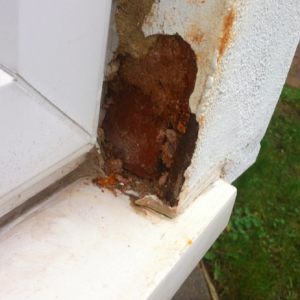 We believe that an overly strong render mix was used that suffered shrinkage cracks during the drying/curing period, hence the prevalence of cracking to the southeast and southwest elevations. However, the bigger issue was that edge beads had been incorrectly specified to the window and door reveals. British galvanised edge beads do not meet European standards and are not suitable for external environmental conditions found in the UK. Hot dipped galvanised beads, usually imported from Belgium, may be suitable but these can be difficult to locate so we would always specify stainless steel or UPVc edge and bell cast beads to prevent corrosion occurring within the render system.  In this particular case there was widespread corrosion within the edge bead system and they all needed hacking out and replacing with suitable edge beads. Rusting is an expansive reaction and will continue to cause the render to blow at its junction with the edge beading. Moreover from a purely aesthetic consideration, the edge bead corrosion was causing substantial and unsightly iron oxide staining to the render system.

Given the additional scope of works specified and the poor quality of the original installation we believe that there is a strong argument for complete system replacement but a cost benefit analysis will help the client decide on which course of action to take.  I’ll deal with case study two in part two of this blog where I’ll discuss in more detail what can be done to repair or replace failed render systems. 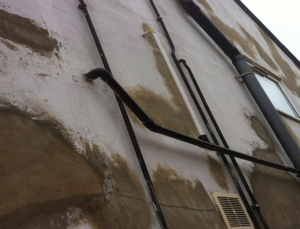 Widespread cracking to southeast elevation mid way through being repaired. Will repairs be cost effective?