The potential damp problems allegedly caused by cavity wall insulation continues to be very topical at the moment. With this in mind it may be worth relaying details of another defect we were were asked to investigate this week.

We were called to London to investigate an isolated patch of penetration  damp to a ground floor bedroom.  My client had been unable to resolve this problem and was somewhat mystified as to what was causing the problem. 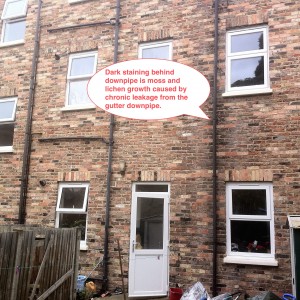 On the surface, it appeared to be a straightforward case of penetrating damp and an external check to the rear of the property immediately confirmed a longstanding problem with gutter leakage that had saturated the rear wall to such an extent that a dark patch of moss and lichen growth could be seen behind the gutter down pipe, extending from floor to roof level. The roof was parapet walled with a lead box gutter outlet feeding into the RWDP hopper. A simple problem, easily diagnosed and fixed, with the internal penetrating damp easily explained if we were dealing with a solid wall.

However, this was a mock Georgian townhouse, constructed of 320mm cavity walls with bricks laid in stretcher bond. Indeed, the brick bond was the first clue that the building was not as old as it initially appeared. 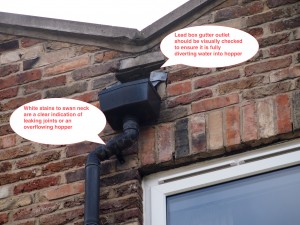 Signs of leakage to hopper head.

There were obvious signs of decorative spoiling and penetrating damp to the right hand side of the bedroom window and we immediately tested the area that gave highest electronic readings with calcium carbide, which returned a total moisture content of 2%. Technically, BRE 245 tells us that this would not require remedial action since it was below 5% threshold. In fact, we believe that 5% is too high and generally recommend remedial action at figures of 3% or more. Two per-cent is still significant and we were of the opinion that the masonry has dried out to some degree over the summer months and would likely revisit with increased severity as we move into the autumn and winter months.

How does moisture cross the cavity?

The proponents of the theory that all CWI is bad may well have liked to blame the blown fibre CWI that was installed. We consistently advise our clients against installing blown fibre CWI on the grounds that we have never yet found it properly installed and it is not inherently waterproof. It may be worth checking out our previous blog on this issue…  Slumping in CWI

Thermal imaging confirmed that CWI fill appeared to be sporadic, which gave us our first clue that blown fibre was installed. We  then drilled through the wall and inspected the internal CWI fill in two locations. Even insertion of the borescope confirmed a problem with voids in the fill material. Inserting through one hole hit soft material, whilst insertion through the second hole immediately hit the hard outer leaf of brick, which of course it would not have done had there been soft CWI material present to block its path. 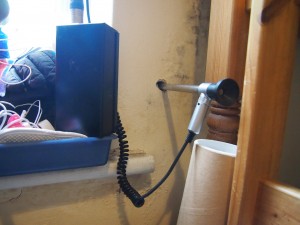 We inspected the cavity with a borescope, which confirmed that blown fibre was installed in extremely limited quantities and that, as usual,  there were voids in the material. However, it was clearly not responsible for moisture transfer across the cavity since it was incredibly loosely packed and would have slumped away from the damp area had it got wet.

This left only one potential cause, and an issue we have encountered many times in the past… a construction defect in the cavity closer. bespoke cavity closers are inherently waterproof and insulated but we have seen cavities closed off with a number of materials that are inappropriate for circumstance. Indeed, it may have simply been closed off with the inner leaf blockwork. Whatever material was used, we believe that this is transferring moisture across the cavity, which also explains the close proximity of damp staining to the window reveal. 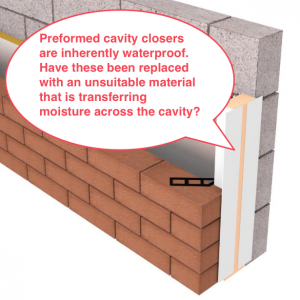 Poorly detailed cavity closer proved to be the cause

We have recommended repair of the external rainwater goods and further recommended that the UPVc window be temporarily removed to inspect and remedy this problem.

Should We Demonise All Cavity Wall Insulation?

Whilst we completely acknowledge that wet cavity wall insulation causes a number of problems relating to moisture transference between the outer and inner leaf, potential penetrating damp and even a secondary condensation damp problem due to the reduced thermal value of a wet wall, we reject entirely the idea that even dry CWI causes problems and yet we are now seeing CWI blamed almost entirely for every damp problem encountered. Scare mongering has always been a great marketing tool but this claim makes no sense whatsoever. 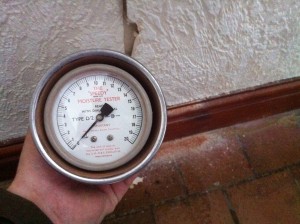 Testing for moisture at depth rules out penetrating damp

Proving that CWI is a problem

The same diagnostic process applies to cavity walls and if testing for moisture at depth in the inner leaf of masonry rules out penetrating damp and if CWI is installed then it is not causing a problem. I have recently read claims that even voids in dry CWI ’cause’ condensation but this is a marketing claim rather than being an actual fact. The argument is that internal surface temperatures are cooler (Possibly below dew point temperature) where the void in insulation is to be found. This is absolutely true but the whole wall would be at the same temperature (Possibly below dew point temperature) if no CWI was installed. All this really proves is that the CWI is having a positive effect on the wall surface temperatures where there are no voids.

Some home owners even had CWI installed to help mitigate for cold surface condensation issues as well as to reduce heat loss and indeed it helped and is continuing to help in many many cases. We are we not suddenly  going to reject the idea that improving wall surface temperatures is a significant factor in reducing issues of cold surface condensation.

A mathematical relationship exists between ambient temperature (Ta), dew point temperature (Td) and relative humidity (RH), if:   Ta is = to Td then RH equals 100%, directly impacting on one value will affect other values. I recently read that CWI causes an increase in internal temperature and a subsequent rise in RH; this point was given in explanation as to why even dry CWI can cause condensation. Again, this is wrong and in fact the reverse is true, an increase in ambient temperature results in a decrease in relative humidity because warm air can hold more moisture than cool air. Generally speaking we wouldn’t even agree that CWI results in an increase in ambient temperatures because most occupiers do not suddenly take to turning up the thermostat on having CWI installed. What actually happens is that they generally have heating set to the same comfort levels but use less energy in maintaining those levels. It is rather simplistic to say that all recipients of CWI now run with higher internal temperatures in their properties so technically there would be zero effect on internal RH levels.

The single biggest direct impact of having dry CWI properly installed is that it raises internal wall temperatures above dew point temperature and therefore reduces the risk of cold surface condensation damp. If it is not inherently waterproof and if the potential exists to transfer moisture across the cavity then problems can occur but the issue needs to be contextualised and it has to be recognised that marketers are now latching on to the anti CWI campaign and these are quite often the same people that installed the product. It would in our opinion be foolhardy and unnecessary to embark on a National campaign to remove all CWI without first gathering evidence that it is actually causing a problem. Visual evidence of damp and decorative spoiling caused by damp does not prove that CWI is the cause of that damp.

So how common are cavity wall insulation failures?

As an interesting aside to this piece and perhaps to underpin our point… I recently received a telephone call from the founder  member of CIVALLI, the cavity wall insulation victims alliance. It was explained to me that BBC Wales had done a piece on cavity wall insulation failures, which had been picked up by BBC East Midlands, who also wanted to do a piece on the alleged high levels of cavity wall insulation failure. Unfortunately, the fly in the ointment was that CIVALLI didn’t know of any failures in the East Midlands and thought that I might be aware of a ‘victim’ to help validate the piece. I explained that I knew of no ‘victims’ and also that I thought the BBC Wales X-Ray piece was in my view, an irresponsible piece of journalism that made no sense of the facts presented. I’m not interested in sensationalist news stories, I’m interested in facts and evidence and my personal experience is that cavity wall insulation failures are not as common as CIVALLI would have us believe; perhaps the fact is illustrated by virtue of the fact that they were not aware of a single case of failure in the East Midlands that could be used to support another sensationalist news story.

What exactly is the problem with Cavity Wall Insulation?

I suspect that the day of reckoning is fast approaching for irresponsible Cavity Wall Insulation installers but to date the campaign and public outcry against CWI failures has primarily centered on poor specification and installation. However, I think there is another very important question that should be asked… for those properties that were subject to a reasonable level of due diligence, responsible pre-survey work and sound installation methods, is it possible that even those installations may have failed despite all the installers best efforts? Sadly, the answer is a resounding yes and it’s an answer I give based on pragmatic experience on what I’ve been finding on site for a number of years.

I have been warning my clients against using blown fibre cavity wall insulation for quite some time because as part of the damp investigation process I frequently open up cavities or at least inspect them with a borescope. I firmly believe that blown fibre cavity wall fill is responsible for the vast majority of failures relating to CWI installation and I generally discuss two modes of failure in my reports.

Realistically, all properties would be best having a follow up visit to top up the fibre CWI after it has slumped but this rarely, if ever occurs. 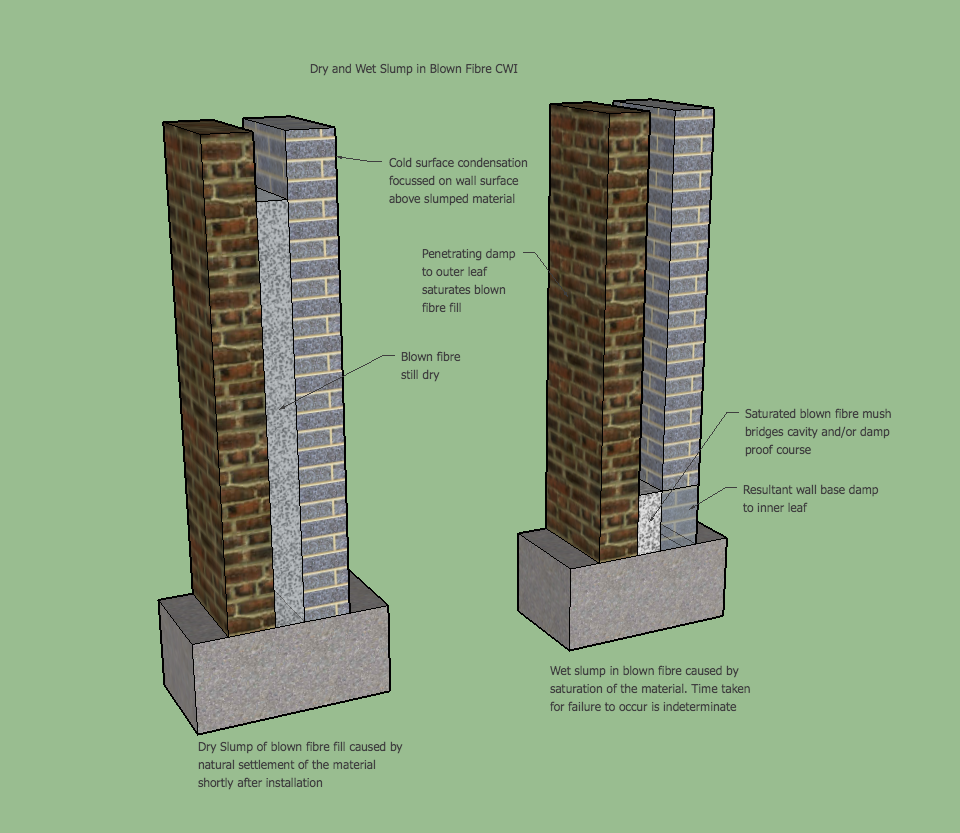 Aside from wet or dry slump, I consistently see the problem of inconsistent and patchy fill. This problem is fairly obvious under thermal imaging and it is more unusual to find solid and consistent levels of fill than it is to find empty voids in the cavity. I think this problem has been fairly well reported and I’ve seen a number of thermal images online aside from my own that highlight the problem.