I  am often asked how common rising damp is and after being asked again today I wanted to outline my thoughts on this issue, since we have a damp proofing industry operating in the UK, which operates on the premise that rising damp is a common occurrence. In fact it is incredibly rare and a review of the academic text relating to this question led to the following academic review…

How common is rising damp?

It’s important to examine the incidence of rising damp in order to understand the size of the problem. Oxley T A, and Gobert E G (1999, p.7,8) state that awareness of dampness has also been stimulated by the rise of a service industry of ‘specialist’ firms devoted to curing it. This is an industry largely directed towards curing rising damp. This is a competitive industry which uses a lot of publicity; it has spread quite widely the impression that rising damp is the main cause, or at least a very frequent cause of dampness in buildings. In fact rising damp is a relatively uncommon cause of dampness in buildings.

Table 2.1 (below) further clarifies this by showing that 12.6% of damp properties are affected by rising damp.

Oxley T A, and Gobert E G (1999, p.1,2) state that, we have good reason to believe that only about one third of all dampness problems are due to rising damp. They further explain; in the Protimeter laboratories specimens of wallpaper and plaster are received almost daily from surveyors and local authorities for chemical analysis for the presence or absence of certain nitrate and chloride salts, which are typical by-products of rising dampness. Salts are consistently found from year to year to be present in only about one third of all specimens tested. An even lower incidence is reported by Trotman P, Sanders C, Harrison H (2004) who state that rising damp featured in 5% of the 510 occurrences during the period 1970-74; 4% of the 518 occurrences during the period 1979-82 and 5% of the 520 occurrences during the period 1987-89, an average of about one in twenty of all (damp) investigations.

Oliver A, Douglas J and Stirling S (1997, p.186) give three reasons why rising damp is not as pervasive as other forms of damp: 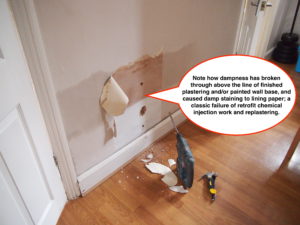 General academic consensus puts the incidence of rising damp in all damp properties at around 5% but our own view based on pragmatic experience of carrying out hundreds of detailed damp investigations, using the full range of diagnostic tools puts the incidence at significantly less than 5%. General speaking I believe that earlier investigators failed to understand the difference between true and induced rising damp, which would give a falsely high incidence. Lets assume 5% is correct though, even if this were true, one in twenty damp properties affected by rising damp is relatively rare. Practically speaking, we do not find true rising damp in anything like 1 in 20 damp properties. We may encounter three or four cases a year and for each case we almost always identify subterranean leaks and consequential high ground moisture levels as the cause.

Theres a great irony in that an industry, that promotes the incidence of true rising damp is in our experience, primarily responsible for causing it. However, this wouldn’t be true rising damp, rather, it is what we call ‘induced’ rising damp. Whenever waterproof coatings are applied to walls that prevent moisture evaporating from that wall then the moisture has nowhere to go but up. In these situations there is no limit to the rise height, as academically accepted to be the case for true rising damp and often the first sign of this problem is damp staining breaking through at the top of the finished waterproof plaster or render system, such as in the image below. The solution for this is to undo the work done by damp proofers and remove the cementitious render from the wall to reinstate wall base evaporation. We commonly encounter induced rising damp wherever we follow in the steps of damp proofers but we rarely encounter true rising damp and where building technical details are correct then it is usually caused by high local ground moisture caused by leaking drains (foul and storm) or leaking incoming water mains. 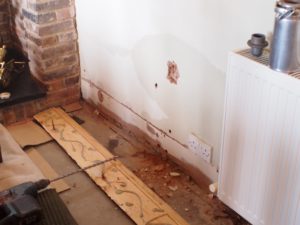 Unexplained damp patches at high level explained when plaster was hacked of to reveal an underlying waterproof render. A classic case of induced rising damp caused by damp proofers.

Training in Damp Investigation and Remediation

Why chartered building professionals need their own supplementary damp training qualification and why Housing Providers should have their staff trained. 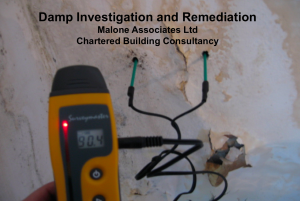 We delivered another 4 hour lecture to undergraduates at Coventry University on November 23rd to supplement their academic learning with pragmatic site experience and to teach them a damp investigation process that can be used throughout their careers. Coventry University run one of the best RICS accredited building surveying degree courses in the UK and their statistics show that they are now one of the leading universities in the UK  for student satisfaction. We believe passionately that future generations of chartered building professionals should not be deferring specialist damp survey work to a damp proofing industry who are significantly less qualified than they are and hopefully drive home the message by using humour to make a serious point. We offered course attendees our D.A.F.T qualification, or ‘Damp and Fungas Technician,’ because we thought that after attending a short course they deserved letters after their name to show that they were damp specialists. Unsurprisingly, there were no takers but we are hopefully influencing the next generation of chartered surveyors to not defer survey work because in fact, they themselves are the future experts in this field. Building pathology is a core building surveying skill and you cannot practise isolated elements of pathology without first having a detailed knowledge of construction technology. Assessment of the building type is a critical part of any damp investigation and you need a construction related degree to underpin any further specialist knowledge you gain relating to damp investigation and remediation.

We have also believed for some time that Chartered professional bodies should be pro-active in developing a professional supplementary qualification for Chartered building professionals interested in damp investigation and remediation. Perhaps not D.A.F.T but maybe something like D.I.P or Damp Investigation Professional. You would need to be a Chartered professional to gain this qualification so as to ensure you have the pre-qualifying knowledge of buildings and building technology. In our opinion, a comprehensive course could be delivered in two days because no supplementary training in site health and safety would be needed.  I would also suggest that a professional damp report is reviewed to ensure it complies with a recognised survey process and protocols before being awarded the final qualification. This will ensure that professionals have both the knowledge and the full range of diagnostic tools required to carry out a professional damp investigation.

We are in discussions with Chartered bodies to deliver CPD training in damp investigation & remediation and this will possibly start in February of 2016 so please watch out for this. Our aim is to give Chartered professionals, or those working towards chartered status,  the knowledge and confidence to stop deferring ‘specialist’ damp survey work, because in fact, it is not specialist at all, it is a fundamental part of any chartered professionals job role.

We have also been training social housing technical staff in damp investigation and remediation since 2006 and I wrote our course in damp investigation and remediation because as a senior manager working within social housing I saw tens of thousands of pounds being poured down the drain every year on unnecessary damp proofing works caused by incorrect diagnosis of rising damp. Moreover, these costs were repeatable at some future point in time because damp proofing companies have no interest in curing damp, they simply want to sell systems that manage damp. It was always very difficult for me to understand why an industry so concerned with cost efficiencies did not understand that this was one of the biggest potential areas to make savings on the both planned and responsive maintenance costs. Larger social housing providers cannot employ chartered professionals every time they encounter a damp property because the budget would be blown very quickly but they should have a clear focus on curing rather than managing dampness. That being said, many providers have retained our services to deal with the more complex cases or legal disputes relating to alleged disrepair or statutory nuisance.

Many housing providers carry their own technical teams, often HNC or degree qualified in a construction related discipline. We have trained hundreds of industry surveyors since 2006 and have been delighted to see these organisations completely change their approach to dealing with damp properties, they now take responsibility and have a focus on correct diagnosis to ensure they achieve a cure for the damp rather than throwing money away on unnecessary damp proofing works.