An Introduction to Thatched Roofing 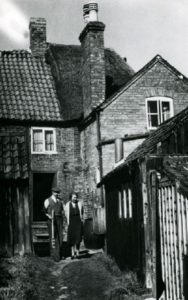 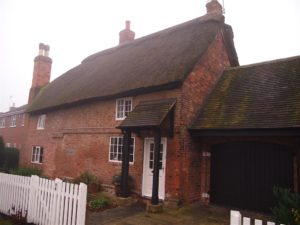 We carried out a full condition survey last week on a beautiful 600 year old cottage in Nottinghamshire. From my perspective the key point of interest was the thatched roofing and understandably we had a client who was particularly interested in its condition and the potential cost of any repairs of maintenance. When dealing with buildings of this age then obviously there is a strong focus on conservation so that often involves doing a great deal of background research into the history of the building and in this particular case there was an anomaly to clear up… Doing the background research we came across an image of the building taken in the 1950’s that clearly showed the roof to be only partially thatched. We were confident that the thatch predated the clay pantiles seen in the image but it was

important to prove it.

This is a grade II listed building and the provenance of the roof may well influence any listed building consents that may be required. More important, since it was immediately obvious that the building needed a re-thatch.

What we managed to find was two comparable street scenes taken over a century apart that proved that the thatch predated the partial clay pantiling.

We also noted that in the early streetscene that roof was seen to have a flush ridge, as opposed to the  current decorative patterned ridge. The flush ridge, gives rise to the possibility that the thatching material has been changed over the decades.  Long straw is generally installed with a flush ridge. However, the patterned ridge, as currently installed, was a post world war 2 fashion and it is more likely that the change in ridgeline simply followed the fashion for patterned ridges. It should be noted that patterned ridges are more problematic and have a reduced lifespan. This is because the hazel liggers, used to hold the ridge in place, impede rainwater runoff from the ridge, creating depressions and moisture pathways into the straw, which promotes rotting of the straw. There is a strong argument for returning the roof to a flush ridge should the cottage be re-thatched. If the current patterned ridge is retained then the client should be prepared for more frequent ridge changes. 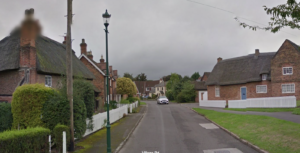 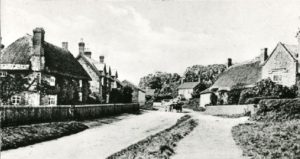 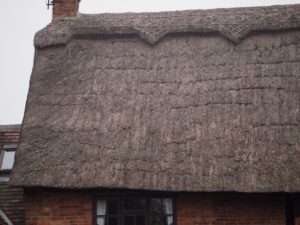 Exposed horizontal sways & spars due to loss of thatch material

Traditionally there are three types of thatching material, Water Reed (Traditionally from Norfolk though most reed is now imported due to high demand), combed wheat reed (straw), or long straw. Water reed requires a complete roof strip back to timber when it is renewed, whereas combed wheat straw (reed) and long straw can be partially stripped and re-thatched. The material on the roof of this particular cottage is combed wheat reed.

we noted a number of issues, which included:

• Heavy build up of moss to some areas of the roof, particularly near the chimneystack to the northeast corner of the building.

• Substantial stripping of straw material and exposure of both the hazel fixing sways and plastic fixing spars, particularly to the south elevation of the roof.

• Complete failure of the mortar fillet flashings around the base of the chimneystacks. 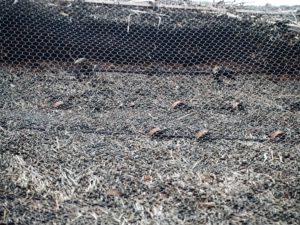 It was particularly interesting to note that the ‘U’ shaped fixing spars are manufactured plastic fixings, as opposed to the more traditional hazel fixing spars but this is unsurprising, since handmaking hazel fixing spars is incredibly labour intensive and something of a lost art.  It’s also  worth noting that even the wire netting, installed to prevent birds from stripping material from the roof, can help aid identification since only the ridges are generally netted for water reed, whereas straw is completely netted.

It is clear the roof needs re-thatching in the short term, and this would also include installation of a new ridge. You should generally budget for circa £120.00 per square meter, though thatcher’s often quote by the ‘square’, which is equal to 100 ft2 or 9.3 m2. The total cost for a square would be in the region of £1116.00 net.  In this particular case we calculated circa 130 square meters of thatch so replacement may cost in the region of £18,720.00 inclusive of vat at 2016 prices. For context and an historical perspective this is circa two thirds of the National average wage. 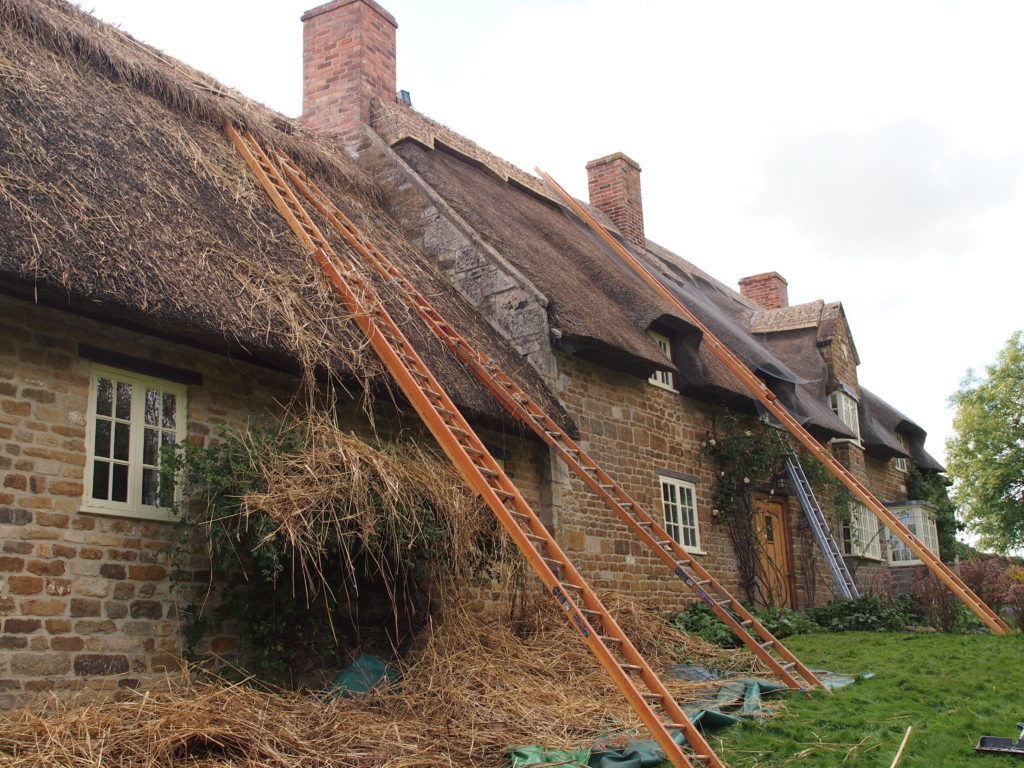 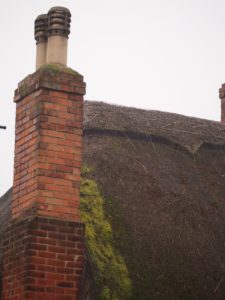 Moss build up causes underlying thatch to rot. You should have the roof ‘demossed’ as required.

When inspecting the roof structure we would always check the timber moisture content of the roof to ensure that the roof  timbers are not at risk of timber decay. The ideal moisture content for roof timbers is between 8-12%. This is slightly elevated but well below the 20% danger threshold and what roof timbers could be visually inspected,  appeared to be sound.

Chimneys and flues are a particular concern when dealing with thatched roofing since a high percentage of fires started in thatched roofing are caused by chimney and/or flue defects. However, that should be contextualised against the view that fires in thatched roofing occur no more frequently than they do in more traditional roof coverings and the frequency of fires has been greatly exaggerated. Statistics prove this point and insurers are well aware of this fact but the comparable incidence of roof fires is probably down to the fact that owners of thatched roofing understand the risks and take the necessary sensible precautions to mitigate the risk. Some of the general fire safety considerations required for ownership of thatched roofing include:

• Have the chimneys swept twice a year

• Chimneystacks should be kept in good repair

• Always have hard wired smoke detectors installed to the property 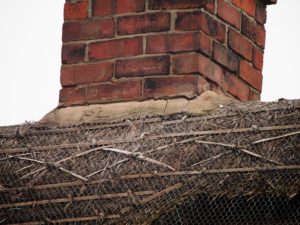 We noted a number of obvious visual defects to the chimneystacks

• Repointing was required to the two high level stacks on the main roof ridgeline. Previous attempts at repointing have been poor and the mortar has already failed.

• There is substantial failure of the cement flashing fillets to the base of both chimneys to the main roof ridgeline.

• We also noted that the cement flaunchings, which secure the clay chimneypot, appear to be failing on the central chimneystack.

We do not have a problem with the use of cement mortar fillets though lead can also be used; however, they have probably failed prematurely because hard Portland cement rather than more flexible NHL 5.0 lime mortar was used. 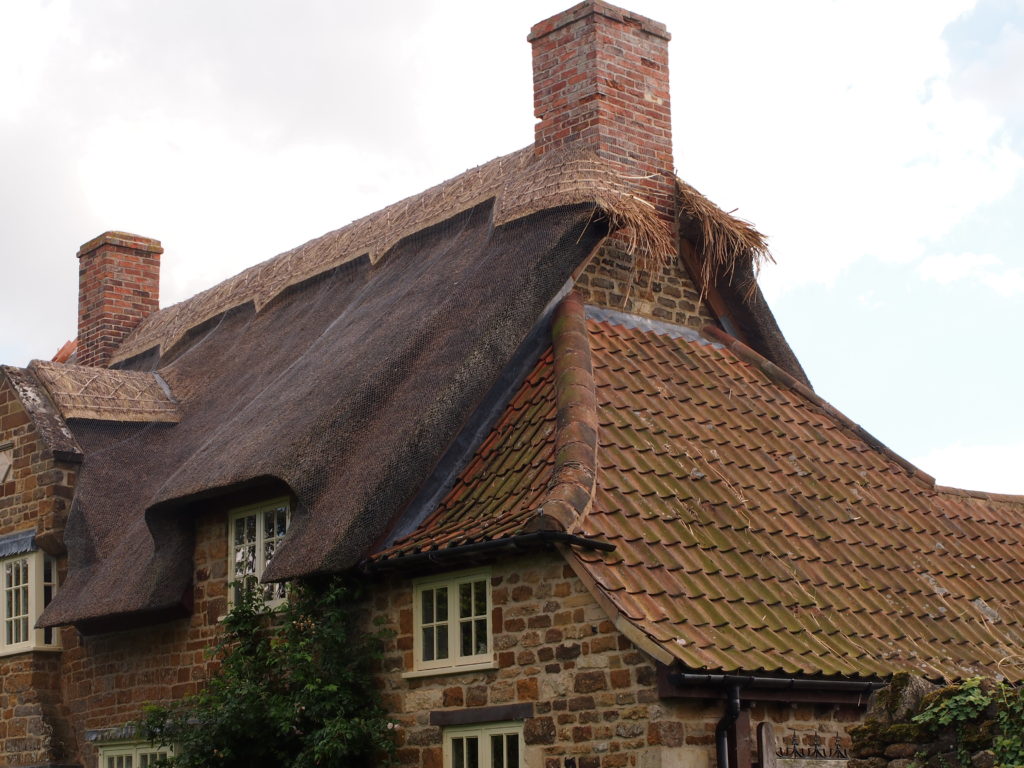 Thatched roof new ridge in progress (Summer 2016) but chimney flashings not yet complete.

There is no doubt that thatched roof ownership comes at a high comparative cost when you consider that straw thatch may require a re-thatch every 20-30 years and ridges need replacing every 10-15 years but these are often, as in this case, very special buildings, and they are worth the high cost of ownership.