EXTERNAL WALL INSULATION: The Defects are Often Built in. Part 2 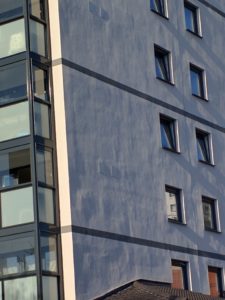 Some time back we blogged about a Midlands high rise EWI scheme that we’d monitored and noted that defects were being built in. Interestingly we have now noted very obvious visual signs of premature wall cladding failure. In fact we recently investigated a failed EWI scheme that exhibited a number of visual problems that were also noted on this scheme. When you consider that it generally costs circa £1m to install EWI to a high rise block then system failures become extremely expensive to remedy. In this particular case I drove past the building today and immediately noted early visual signs of system failure, in particular, what we call ‘thin coat failure.’ The white finished render should be ‘in plane’ and present a smooth finish across the whole facade but in this particular case you can now see that the underlying Rockwool insulation slabs in the Alsecco system are clearly visible; so what causes this and what are the implications?

We have previously written about the effects of pillowing and mattressing but this is something generally seen in Phenolic insulation boards, it isn’t a problem you see in Rockwool slabs.  Please read http://buildingdefectanalysis.co.uk/solid-wall-insulation-ewi/a-case-of-pillowing-or-mattressing/ for more information.

Since we had initially commented that insufficient hammer fixings were being installed to the Rockwool slabs then we also believe that there is risk of structural failure at the interface between the Rockwool slab and the underlying substrate. However, experience tells us that the visual evidence suggest something far simpler… The render base coat has probably been applied far too thinly.  It is a problem that we are commonly seeing and we’re unsure if this is a result of the construction bean counters short ordering materials or whether it is simply down to poor site quality management?  The problem with overly thin render coats stretches well beyond the obvious aesthetic problem and raises two key technical issues. 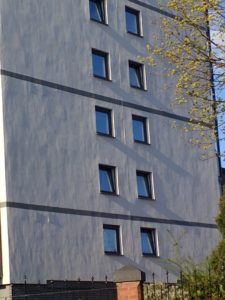 So we believe that this system is suffering from thin coat failure and has failed prematurely on both aesthetic and technical grounds and we predict significant technical problems in the near future. The only subjective discussion is with regard to the degree of failure exhibited.

You may wonder why these thin render coat failures are not immediately obvious on works completion and we think that is down to simple curing and shrinkage of the render, which can occur over a number of months; this project was only completed in October 2015 but visual system failures had to be evident months before we observed them. As the render coat shrinks back, it thins to reveal the underlying insulation boards, usually first noticeable when sunlight hits the elevation concerned.

So, is there a remedy for this? If caught early enough before water penetrates and saturates the insulation, is there a quick fix? Sadly no. The problem is that whilst it may seem reasonable to offer additional coats to increase the render thickness, this  system would no longer have BBA approval. The reason for this is simple… You would be applying further base coat over an existing topcoat but the system was never tested with base coat applied over topcoat and therefore would no longer be BBA approved. We have written correspondence from the BBA stating precisely that fact. 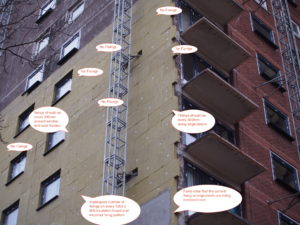 It is easier to contextualise this system failure when comparing the underlying defects noted as the system was being installed and here we can see the poorly installed rectangular insulation slabs that are now showing through the render coat.

In our opinion both Rockwool slabs and EPS boards offer greater flexibility and potential for at least partial recovery of the EWI system but even retaining the insulation needs careful consideration based on a detailed investigation and recovery of site evidence.