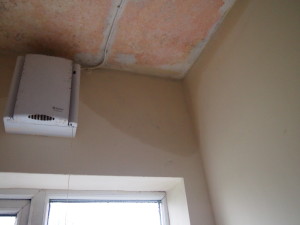 A functional extractor fan with common wiring arrangements fails to prevent condensation in this concrete block.

I have previously outlined my views as to whether or not residents are responsible for condensation damp and we believe that they very rarely are. Residents cause humidity but generally speaking it is buildings that cause condensation and so it is critically important to understand ventilation strategy. That statement will make uncomfortable reading for those landlords relying on spurious claims that condensation damp is an occupancy issue. A potential client called me just this week and told me that her landlord, a large local authority in London, had refused to deal with dampness in her flat because it was proven to be condensation and therefore it was her problem and not theirs. Quite an outrageous position to adopt and one I’m sure will end up costing them considerably when they land in court. I’m sure that the flawed logic behind their position is that the occupant created the humidity and they simply have to manage that humidity by opening their windows and using their heating; advice that is clearly contradictory because it is akin to puncturing your petrol tank just after you’ve filled her up.  You’d really like to keep that expensive petrol in the tank but you’ve been advised that the tank is safer with less petrol and more air so puncturing the tank works a treat.  I hope my analogy illustrates the that fact that opening your windows in the middle of winter to manage condensation is nuts, and if anyone else ever gives you that advice you should tell them so.

I gave  a talk on dealing with damp in old and historic buildings at the RICS conference in Loughborough this week and there was some focus on ventilation strategies because by far the number one damp problem that we see in old solid walled properties is condensation damp. You  could argue that this is simply because we always house really bad tenants in old solid walled properties, irresponsible tenants who are incapable of managing their own humidity but of course the idea is ridiculous; could it simply be that old solid walled properties are thermally inferior to modern properties? It’s a rhetorical question because  we rarely encounter ‘occupancy’ related condensation damp and where we do then it is generally caused by over-occupancy and is a housing management, rather than a building technical issue.  Please review  The Condensation Trap

Why Opening Windows is a Very Bad Idea 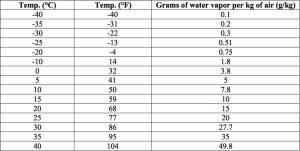 We know that old solid walled properties are thermally inefficient and suffer from thermal bridging. They are prone to suffering condensation damp because thermal bridging causes cold internal wall surfaces that are often below dew point temperature. Therefore warmth and heat retention is an equal consideration to achieving air changes within the property. We know that warm air holds more moisture than cool air so an increase in ambient temperature will immediately reduce the internal humidity levels. Lets say that we have a room temperature of 20°C and an internal humidity of 80 percent, if we turn the heating up to 25°C then the internal humidity immediately reduces to circa 60 percent thereby reducing the risk for condensation. The secondary benefit is that this increase in ambient temperature will raise internal wall surface temperatures and may well raise them above dew point temperature, which is another substantial risk reduction, and bear in mind we’ve not even thought about air changes yet.

If we adopt the more common approach of opening windows to achieve air changes something quite different happens… Again imagine that we have a property  with a room temperature of 20°C and an internal humidity of 80 percent. It’s chilly outside with external temperatures of only 3°C but we open the window anyway and this allows cold air to immediately enter the property, reducing the ambient temperature and further chilling the building fabric possibly below dew point temperature; this in itself is an increased risk for condensation. Air at 20°C can hold 15 grams of water vapour per kilogram of air but since the ambient temperature has now reduced, lets say to 5°C, then the air can now only hold 5 grams of water vapour per kilogram of air. So what happens to the missing 10 grams of water vapour? Well quite simply it is immediately given up as transient condensation within the property, the cooling effect of incoming air is so quick that humidity does not have time to exit the building. Transient condensation is what frequently occurs in bathrooms when occupants open windows after a shower and the immediate effect of transient condensation convinces everybody that the steam exited the window but in fact they have been fooled. If it is cold outside and you open a window it will cause transient condensation and of course also results in very high levels of expensive heat loss.

Why We Need an Effective Ventilation Strategy