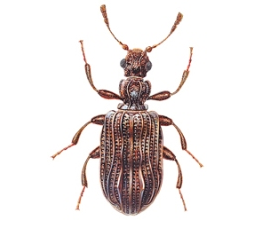 We’re all heard of woodworm, the term used for the larvae of the destructive furniture beetle, precisely for the reason that they can be destructive but there are other forms of infestations not generally considered harmful that you may not be aware of, the plaster beetle is one such visitor. Of course, if you’ve suffered from a plaster beetle infestation then you’ll be well aware of this pest. We recently took a call from a client asking for advice on a plaster beetle infestation in a new build property. The constructor had called in a pest control company who had fumigated but the client experienced re-infestation within two weeks of the treatment.

Plaster beetles get their name from the fact that they are often seen in new properties where damp plasterwork often provides ideal environmental conditions for these visitors. Also known as scavenger beetles, plaster beetles are part of  the lathridiidae family, a family with over 1050 described species.  This particular visitor is an unpleasant nuisance rather than being harmful but nevertheless, no one would want a plaster beetle infestation in their home. The problem is not often reported on because they are relatively innocuous however we found this report relating to a new build infestation that gives a feel for how unpleasant a plaster beetle infestation can be…

“In September, the couple spotted tiny insects in the kitchen. “I went into the bathroom and saw plaster beetles all over the wall,” says Jane. “As fast as I cleaned them away, they kept on coming. They were all over the bedroom and in the kitchen. The microwave, toaster and a television were so badly infested that I had to throw them away.”
The couple were told by the council’s environmental health department to open the windows and turn up the heating, which made things worse.
“Barratt said it had never heard of this method and recommended we used fly spray. I was using 10 cans a day – and still they kept coming. We discovered orange mould under a picture frame and thick green mould under the sink,” says Jane.
At the beginning of November, they consulted an independent environmental adviser, who said that they should have just left the trickle vents open and turned the heating down to 14-16C all day. This seemed to have an effect, but they also had to buy two dehumidifers. “I can’t afford to go on paying for the dehumidifiers to be on 24 hours a day,” says Jane. “We are so upset, as this was our dream house and we just want to enjoy it.” The couple are hoping the infestation might finally be over. “But we can’t be sure, if the conditions change, they might be back.”

What we noted from this newspaper report is how badly the homeowners were advised and how wide the difference of opinion as to how these pests should be dealt with.

Since plaster beetles thrive in damp conditions then they are more prevalent during the wetter seasons but essentially, if you have damp conditions that lead to mould colonisation then there is a small risk of plaster beetle infestation. They have been a particular problem in some new homes where properties have been handed back to new owners without being properly dried out; particularly where properties have been flooded due to careless plumbers; an issue we have seen many many times in new build. Residual  construction moisture can be a temporary issue in new build properties but in the main, properties should be relatively dry unless there is or has been some additional underlying issue. Indeed, it may be that the building fabric is relatively dry but you are suffering from high levels of relative humidity that support fungal growth. Interstitial condensation can be a particular problem since mould formation can occur in hidden voids, thereby providing a hidden food source for beetle colonisation.

Plaster beetles can be anything from 0.8mm to 3mm in length and have a life cycle of 13 to 28 days. Adult beetles deposit their eggs near a food source (mould) and when larvae emerge they feed on the mould spores before eventually pupating into adults. Pupation can take up to five months dependent on the availability of food. Some types of plaster beetle are reasonably good fliers and can be attracted to light, which is why you may see them congregated around a light source or near windows.

Generally speaking we are not great believers in chemical treatments and prefer to deal with infestations like this in a more natural way that avoids spraying harmful chemicals in the home. Since plaster beetles feed on mould and mould is caused by damp conditions in the home then doesn’t it simply make sense to deal with the issue at source by removing the source of moisture and the source of food? Chemical treatments can never deal with the underlying cause of the problem, which is dampness and subsequent mould colonisation. Moreover we simply do not like the idea of spraying harmful chemicals in the home and the chemical effects will reduce over time, thereby requiring re-treatment since the underlying cause has not been addressed. There is also an option of heat treatment, whereby the property is heated to 45 degrees C. This temperature should kill off any plaster beetle colonies in the home but again our main concern is that this does not address the underlying cause so there may well be a risk of re-infestation.

You will need to address the underlying cause and in simple terms you should consider 5 factors:

The source of moisture may be a plumbing leak, penetrating damp or condensation damp and if you are in a new build property, you may simply have to deal with temporary construction moisture by promoting rapid drying. You may want to consider hiring snail fans to dry out walls and a dehumidifier to mop up the excess humidity. If this is not successful then it is likely that you have a more significant underlying source of moisture that needs identifying.

If mould colonisation is obvious then treat this with a proprietary fungicidal spray to help eliminate the food source and where plaster beetles are seen then they should be vacuumed as frequently as possible to help manage the population whilst the underlying cause of dampness is being addressed.

The underlying cause won’t always be obvious, in which case you may need to call in a Chartered Building professional. If you call in a pest control or damp proofing company then you should expect to be sold chemicals or heat treatments, money that would be better directed towards correct diagnosis of the underlying cause of moisture. 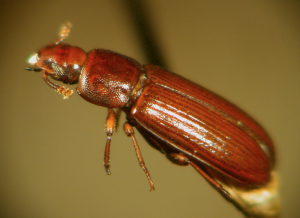 As an aside to this blog, we were recently asked to advise on a flour beetle infestation in a kitchen. The client complained of frequently seeing larvae on the kitchen worktops but had no idea what they were or where they were coming from. Similar to  plaster beetles, they are another relatively innocuous, but nonetheless unpleasant visitor that can invade kitchen foodstuffs, particularly flour and cereal products. However, the issue of seeing larvae only on kitchen worktops gave us a strong hint as to the source of the problem… “Do you have a toaster on the kitchen worktop,” we asked? “yes, we have a double toaster” came the reply. We advised the client to open up the toaster and clean out all the old breadcrumbs that had accumulated in the base and sure enough it was packed with two years worth of breadcrumbs and a flour beetle infestation that was completely eradicated once the toaster was cleaned out and the food source was eliminated. Some of these toasters have cleaning trays in the base that can be removed for cleaning but they are simply not up to the job. Of course we’d completely understand that many would prefer to simply throw the toaster away rather than clean it out but we’re not advocating mass toaster disposal without first checking that this is the source of the problem.