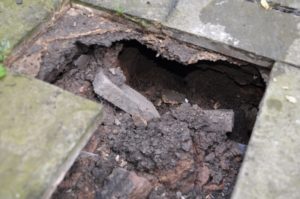 Sink hole or something less serious?

We recently attended an old property in Nottingham where minor structural cracking was evident and in these cases we always suspect a problem with leaking drains, but what initially prompted the call was the  fact that a small sink hole appeared to have developed under the clients rear patio; we understand that the clients foot had simply fallen through the joint in a slab as it gave way due to lack of adequate sub base. 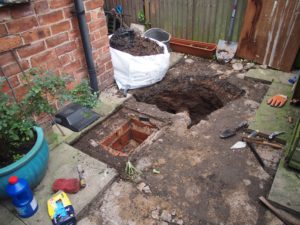 On attending we lifted paving slabs and noted that a void had appeared beneath the slabs. We read a lot in the press these days about sink holes appearing but I was confident that this was something far less severe, a subterranean leak.

Leaking drains are often the Cause of Structural Cracking

The building itself was starting to show some evidence of structural cracking to the rear corner of the building, which supported our initial view that there was a localised leak to the foul drains, the storm drains or the incoming water main, which was washing the fines away from the foundation bearing strata. 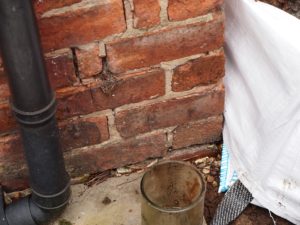 Whilst the labourer was excavating the patio, we carried out a back siphon test on the incoming water main, which proved we had a leak on the incoming main. Locating the exact position of that leak could prove challenging but excavation continued in the location of the ‘sink’ hole that had appeared until we eventually uncovered that salt glazed clay drainage pipework. It was immediately clear there was a problem when looking in the inspection chamber, as a hole had been smashed into the top of the drain to allow the storm drain pipework to discharge into the top of the smashed drain; all signs pointed to poorly installed and poorly designed drainage. 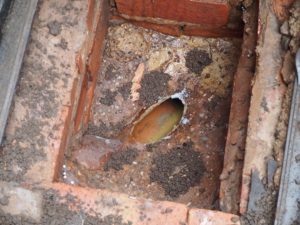 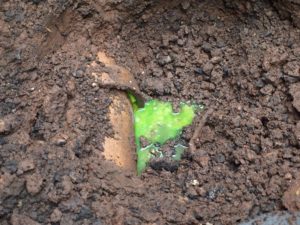 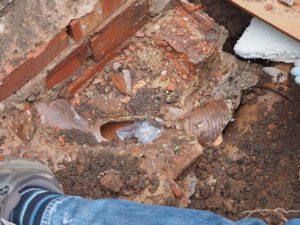 We advised the client that the lead main should be replaced but this couldn’t be done at this time and the leaking joint was repaired, followed by installation of a new preformed plastic inspection chamber and associated pipework. The clay collar was cut off existing salt glazed pipework to allow a connection to be made to the new plastic drainage with a flexible rubber connector, which was secured with stainless steel hose clips. 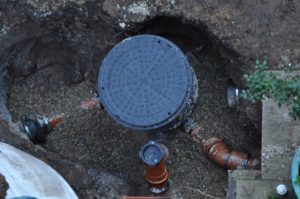 As a business we’ve invested heavily in diagnostic equipment, even purchasing our own CCTV drain inspection camera, because wherever we deal with structural cracking or indeed dampness in buildings, we almost always find subterranean leaks to be the cause of the problem and we like to give our clients answers rather than deferring that work to others.