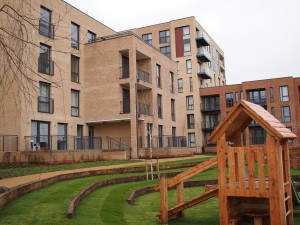 Malone Associates Ltd, were recently instructed by a large National developer to help resolve a dispute relating to one of their London developments. Essentially we were asked to investigate issues relating to ongoing dampness within a newly laid floor slab within a flat in a new low rise block. The history surrounding this matter was that a client had purchased the flat then noticed air blisters under the Amtico flooring in her lounge. The Amtico was taken up and a square section of the floor screed was excavated to see what was going on. My understanding was that moisture was found sat on top of the plastic resilience layer, the floor was patch repaired and further drying was being carried out and monitored until such time as readings were obtained that were low enough to justify laying the finished flooring.

We were unsure what methods of testing and monitoring was being carried out but had early concerns that the wrong type of equipment was being used.

It could be seen on initial visual inspection of the floor screed was stripped of finished Amtico flooring and attempts had been made to strip the screed of flooring Adhesive and primer. This is a difficult process and it was clear that there were still patchy areas of adhesive residue across the lounge floor. We also noted a large patch repair area to the floor and noted the dissimilarity between the existing screed and the repair material. It was initially assumed by site staff that the repair section was calcium sulphate and therefore compatible with the rest of the floor. When I asked for this to be confirmed the staff member who repaired the floor confirmed that it was in fact concrete and as such this repair section is incompatible with the existing floor screed and would need to be excavated and replaced. This is because the Tricalcium Aluminate present in ordinary Portland cement (OPC), contained within the concrete repair section, will react with the sulphate in the floor screed and cause ettringite to form. I’m sure you will all recognise this problem as Sulphate attack, which is an expansive reaction and could well lead to problems with the finished floor in the near future.

We noted the presence of a Tramex CME (Concrete Moisture Encounter) within the flat and it became apparent that floor moisture readings were being obtained by this means. This is standard industry practice because these meters are specifically calibrated for concrete and concrete floor screeds. Indeed, we use a Tramex CME ourselves but we are aware that the tool has some limitations when it comes to a reliable diagnostic process. We took electronic moisture readings across the whole of the lounge floor to obtain comparative readings and our own readings tended to confirm and support the previous statement made by the developer, to the effect that moisture levels were highest nearer the patio doors leading to the balcony. We received our highest Tramex reading of 7.5% at this point, which would tend to indicate that the floor was significantly damp. We also noted a very high Tramex reading of 6% to the concrete repair patch. We were looking to obtain readings of 0.5% total moisture content (TMC) or <=75% equilibrium relative humidity readings (ERH). Some of the more attentive readers may have already spotted the potential problem with the use of the Tramex on a Calcium Sulphate floor screed… Did you note that I said they were calibrated specifically for concrete? Calcium sulphate is not concrete and therefore any readings obtained with the Tramex can only be referred to as a relative reading. Tramex’s own product information states that ‘The Concrete Encounter utilises “state of the art” electronic technology to provide the flooring industry with an accurate and simple to use non-invasive handheld instrument for nondestructive testing (NDT) of Moisture Content (MC) in concrete and comparative moisture readings in, gypsum and other floor screeds.’

Moreover, the Tramex is only reasonably reliable when used on virgin concrete that is clean and dust free. Once primers, adhesives and other coatings have been applied to the floor then the Tramex becomes even less reliable. The floor in question had too much surface contamination for the Tramex to ever be reliable even it was concrete as opposed to Calcium Sulphate flooring.

Because the floor repair section was to be excavated and repaired we decided to test the floor using the calcium carbide meter. For those of you not familiar with calcium carbide testing, a small amount of test material is weighed and placed into the pressure vessel. This is then mixed with calcium carbide powder and the chemical reaction within the vessel releases acetylene gas that pressurizes the vessel and causes a reading to register on the gauge. The amount of acetylene produced is directly proportional to the amount of moisture present in the sample and this is the most reliable site test in use for establishing the moisture content of concrete and masonry products. The concrete repair section was indeed still damp, though this was a null point due to its excavation. We simply tested this area to complete our understanding of what moisture contents were actually present right across the floor compared to readings obtained with the Tramex CME. In fact the calcium sulphate screed proved to be bone dry with readings no higher than 0% TMC obtained. 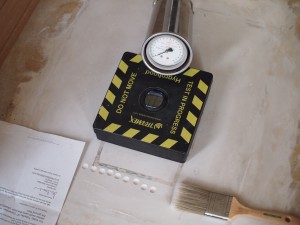 Floor screed testing: Relative readings indicate that floor is wet when in fact it is dry.

We believe that the Amtico flooring was initially laid too early but subsequently after removal of the Amtico the developer has dried the floor thoroughly but been chasing their own tail due to false positive readings obtained from the Tramex.

After the floor slab was repaired we provided the client with ongoing advice for monitoring the deep repair section that was replaced but there are only three reliable ways of obtaining reliable results for moisture content in floor slabs, these are:

Since options 1 & 2 involve destructive testing, then the only option available for ongoing moisture tests in the flat is option number 3. A floor humidity box should be placed on the large repair section and sealed with double-sided Butyl tape. We recommend that the humidity level inside the box is then recorded after a 72 hour period. If the ERH reading is 75% or less then you are free to proceed with the installation of finished flooring. Manufacturers information on the calcium sulphate screed used for the repair section indicated that the screed could take up to 50 days to dry so clearly an initial period of drying would be required before monitoring was started.

The developer chose to use a ‘Tramex Hygrohood’ floor humidity box sealed in place with double sided butyl tape for ongoing moisture measurement of the repaired floor section. However this proved what we already know, in that readings of <=75% ERH are extremely difficult to achieve in floor screeds. Four weeks later I was called back to reassess the flooring after the developer failed to get ERH readings below 77%. Also you must remember that that ERH readings are relative to temperature as well as moisture yet product information makes no reference to the temperature benchmark at which the ERH reading should be taken. We generally recommend that rooms are maintained at circa 20oC when screeds are being dried out and this is a general recommendation that is often found; it therefore makes sense to recommend that an ERH reading of <=75% should be obtained with a room temperature of 20oC. The Hygrohood shows a reading of 77% ERH at 21.5oC but if we drop the room temperature to 20oC then the ERH increased to circa 80%.

The client asked if we could test with calcium carbide again and it was simply a matter of understanding what depth the latex screed could be laid to. This allowed us to take a series of shallow drillings to obtain enough material for calcium carbide testing. The test again proved that the repaired floor section was now completely dry and the developer could move forward with installing the latex screed. The drilled areas will be made good by the latex screed.

All this proves that obtaining accurate moisture measurement in the field can be fraught with difficulty and pitfalls. Moreover, I think some of the guidance information is poor; particularly the guidance that an ERH of <=75% should be achieved, perhaps <=80% ERH would be more realistic because once that figure was achieved at a room temperature of 20oC the floor proved to be dry. You need to adopt a pragmatic approach in the field, understand the limitations of your test equipment and thoroughly review build specifications and manufacturers product information.