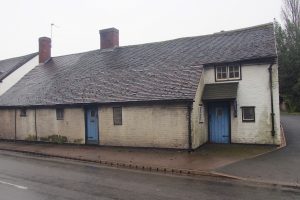 It’s a fairly common occurrence to survey old solid walled buildings and find some distortion in the masonry; the walls often found to be bulging or leaning to some degree; and indeed we’ve encountered two such properties within the last four weeks, the latter case was particularly interesting and forms the subject of this blog.

The building in question is a 16thcentury building, originally built with an Oak timber frame and brick infill panels. In fact the building was originally separated into three small cottages but over time was converted to a single large cottage. The building is grade 2 listed but has been derelict for some years but about to undergo substantial renovation and improvement works. With that in mind we were commissioned to carry out a full condition survey, focussing on structural condition and causes of dampness within the property. Little remains of the timber frame and the external envelope of the building is now of solid walled construction; only two timber end frames exist internally, along with the timber roof structure. which is now almost wholly supported on the external masonry walls.

Checking for Distortion in the Masonry

Commonly we’ll use a simple plumb bob and line or a large spirit level to. check for distortion in masonry. A large spirit level can be used quickly and effectively, and in this case we noted bulging to both the front and rear walls of the property. The front walls were at a much reduced height due to the cat slide roof, and despite 80mm of distortion, they were less worrying than the 50mm distortion measured to the rear wall, due to the greatly increased height of the wall.

Bulging of the walls is caused by a number of factors:

In our experience, the type of bulging seen in older buildings built with lime mortar, such as this, is often a lack of lateral restraint. It is a well-known principle that lateral restraint should be provided to arrest any potential movement in the masonry walls, and this is usually achieved by building floor joist ends into the masonry, or by bonding in internal partition walls at right angles to the outer wall. In this particular case, lateral restraint was meant to be provided by the first floor joists, running from front to rear in the building. However, when viewed internally, the joist ends were set in sockets cut in the central spine bresummer

In this case visual inspection was fairly straightforward, since all the floor joists were fully exposed. However, it is more common for the floor joists to be hidden as they are sandwiched between the ground floor ceiling, and upper floor. Often, we may need to take up floorboards at first floor level to inspect joist ends, and in particular, to assess how they are tied to the masonry walls, and whether lateral restraint is being provided.

The joist end lap joints, seen above, are seen to have pulled clear of the sockets cut into the bresummer, which accommodate them. Ideally, these lap joints would have been secured with oak pegs, but they are unfixed, and have simply pulled clear of their sockets as the external walls have bowed. This technical detail was simply unable to provide the lateral restraint required by the front and rear walls of the property.

When checking some joist ends, we found as little as 20mm of bearing surface at the joist ends, which essentially tells us, that if another 20mm of deflection occurs to the outer walls, then the floor joists could collapse.

The floor joists are now too short and cannot be re-used, unless the outer walls are taken down and rebuilt so as to be perfectly vertical again. In this case, the joists should then be able to be fully inserted back into their sockets formed in the spine bresummer. However, with the amount of deflection measured, the walls should be perfectly stable, so long as adequate lateral restraint in re-instated to prevent further ongoing distortion in the masonry. Joists will be replaced with longer joists which will be adequately tied into both the outer masonry walls, and the central spine bresummer.