The worst brickwork?: A new contender.

The worst brickwork we’ve ever seen. 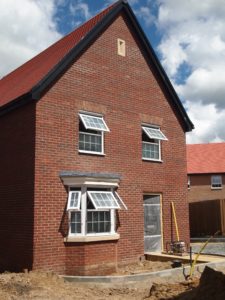 Back in July we were called to carry out a snagging inspection to a David Wilson Homes site in Norwich, which had the worst brickwork we’ve ever seen. Our clients had signed up to buy a new build ‘off plan’ but started to have grave concerns relating to the quality of their potential new home as they watched the build progress. Our initial discussion related to the fact that the brickwork colour was mismatched and that the developer had employed someone to tint the bricks to match; when I arrived on site to carry out the snagging inspection the specialist was at work  painting individual bricks with a pot of red tint solution and a paint brush, a quite laborious task as you can imagine.

We’d agreed to inspect before the build was complete because our discussions with the client, and indeed pictures sent to us, gave enough cause for concern that this was necessary.  The following image slider will give you a feel for the quality of the work and the sheer volume of defects we encountered. Please view the slider on full screen to fully appreciate the illustrated defects.

Would you have bought this house?

As you can see the defects were significant and we commented in our report that we found it difficult to believe that this brickwork was completed by a fully qualified brick layer. Of particular concern was the incredibly poor setting out, failed mortar bed joints, inconsistency in width and depth of mortar joints and last but not least, walls that were significantly out of plumb, well beyond the 8mm maximum allowable NHBC tolerance. As often happens in these cases it was relayed back to us from our client that the developer didn’t agree with our report and that a site manager of 20 years experience knows more than us and his view is that the brickwork was perfectly acceptable. I thought it may be useful to balance the Chartered professionals view with a second opinion  from a master bricklayer and obtained the following commentary from an acquaintance who is also a master bricklayer…

There seems to be wide and inconsistent perpendiculars and significant variation in bed joints.

The pointing is of a very low and poor standard i.e. holes and not perps not ’top and tailed correctly’

Weep holes are protruding out of the brick work and should be flush.

Also bricks have been laid upside down allowing moisture to catch on the face leading to premature failure through ‘spalling’ aka frost damage.

The walls are significantly out of plumb. Variation in plumb should on good brick work be a maximum of 4l mm out of plumb one way or another. Brick courses seem to wander. Chipped bricks have been used rather than discarded. The Brick work is over sailing be 10mm in places below the DPC

There are large gaps around some windows which implies poor setting out.

Some bricks are cracked and should have been discarded. Two failed bed joints are apparent.

The brick work has not been washed or cleaned down.

The mortar colour varies implying it has not been ‘gauged’ and makes the building look patchy.

The damp course is protruding through the mortar.

Back straps for the garage have been missed. Roof ridge work is poorly finished and there appears to be no mechanical fixings

The brick work does not appear to be ‘fair faced’

In all a very poor standard of work has been delivered with a significant amount of snagging already required.

On a site managed by our company this work would be condemned and the brick layers replaced or forced to do the work again to our own companies’ standard.”

The only point on which we don’t agree with on this second opinion is with regard to the DPC being pointed over. DPC’s should not be pointed over, they should be exposed and clearly visible and if they are not then they are bridged.

Our clients reached something of stalemate with their developer, because they were insisting that sections of the building were taken down and rebuilt, whilst the developer was offering minor remedial works that fell well short of dealing with the significant defects in this build. Their complaint was ultimately elevated to the managing director of David Wilson Homes and our client eventually informed us of the following outcome, “We have decided not to proceed with the purchase of the house. I think we always knew this was the outcome deep down. I have received a reply letter from the MD of David Wilson East division offering to rescind the contract and contribute towards ‘reasonable’ conveyance costs.”

When we last spoke our clients were looking to purchase an old traditional property and we completely understand why, moreover, we believe that they made absolutely the right decision to withdraw from this contract. A brave and sensible decision, especially when you consider that many clients purchase with their heart rather than their head.