A Case of Pillowing or Mattressing? – EWI Failure 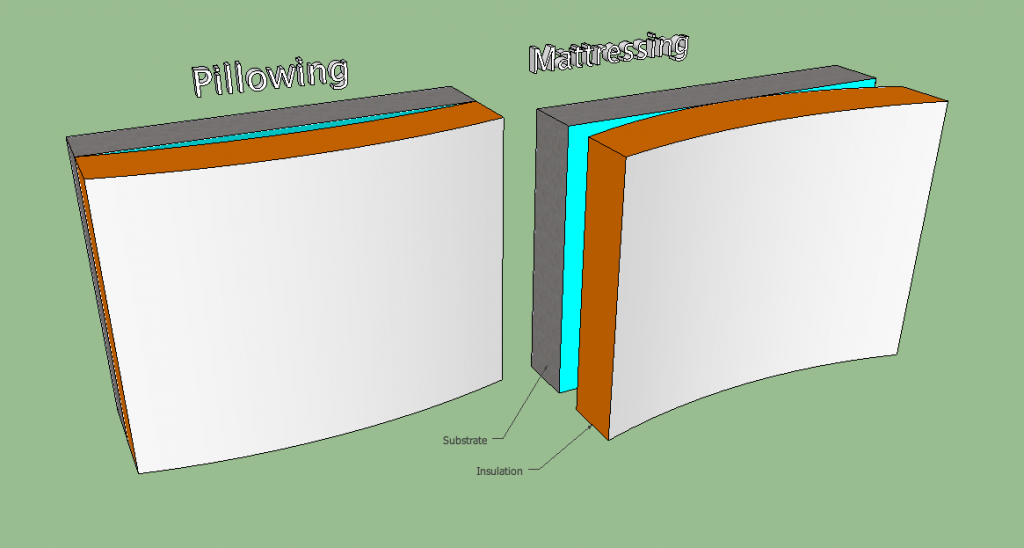 We were recently asked to look at an EWI failure for a potential client. This was a homeowner who had spent £15k on having their home externally refurbished with an EWI system. At circa £100 per square meter this was an expensive system but they’d done their homework and were happy to pay a little extra because they believed that they were buying the best. I was more than a little alarmed when they explained that the system had been installed in 4.5 days and indeed, this did not align with  the 3 week programme that had been described by the installer.

Thankfully the  homeowner had taken photo’s throughout each stage of the installation and this made it easier to understand exactly what had gone wrong, even ahead of doing any invasive site investigation work. Our understanding is that within days of the installation being completed the homeowner noticed that the underlying EPS insulation boards could be seen through the finished coat of decorative render. This was initially noticed at night when the external uplighters shone against the render but as the days went by the boards also became clearly visible during the daytime.

The system designer looked at the problem and described ‘pillowing’ in the EWI system though no explanation for this phenomena was presented. Their proposed remedy was to strip off the render back to the EPS boards and to re-apply the base coat, mesh and finished render; a proposal that we do not feel will go close to addressing the problems on this installation.

In fact, we didn’t agree that this was pillowing but we can understand why the term was used since the insulation boards can also be seen under the finished render when either pillowing or mattressing occurs.  Both effects are generally linked to poor adhesion when the board is bonded to the substrate unevenly across its surface,  for mechanically insulation fixed boards the same effect could also occur where the recommended fixing pattern has not been followed.  We recently encountered an installer who fully bonded phenolic boards to counteract board shrinkage but we’re not aware of any evidence proving this proposition and our view is that it will have little or no effect on the problems caused by board shrinkage, our solution to this problem is not to specify Phenolic boards.

Whether you see pillowing or mattressing can depend on external temperatures and pillowing is linked to warm temperatures, whilst mattressing is linked to cooler temperatures.  The amount of adhesive recommended varies from system to system and for this system a minimum coverage of 40% was recommended.  There is a slight anomaly here since generally you should avoid voids between the insulation and substrate to prevent a stack or chimney effect, this is a naturally induced vertical flow of air that is to be avoided in these systems.

Interestingly, in this particular case, the system designer ordered some 20mm thick insulation boards that we understand were to be used to level off the substrate but they were never used by the installer. Once the EPS boards were installed they should present a  ‘smooth in-plane finished surface’, any high spots should be rasped or sanded to achieve this if required. The installers mentioned to the homeowner that they were short of base coat but when questioned as to why they hadn’t ordered more, said that they’d ‘managed’ with what they had.  Clearly they didn’t because the the mesh should be free of wrinkles and fully embedded in the base coat with the mesh pattern just visible on the finished surface. The system  logo should not be visible through the cured reinforcing coat and yet it was clearly visible. The manufacturer of this system also states that supplementary mechanical fixings are used with the adhesive insulation systems, especially during the strength development phase of the adhesive curing and yet supplementary fixings were only partially used for reasons we cannot fully understand. You will see from the image slider that the insulation boards are clearly visible in the finished EWI system and it is our belief that the reason for this is simply down to the fact that the base coat was too thinly applied to fully cover the underlying EPS boards. The effect got progressively worse in the days following installation due to shrinkage in the  base coat and decorative coat as it fully dried after the installer left site. They may have applied the term ‘pillowing’ as a generalised term to describe a situation where the underlying boards could be seen but as we said, we do not believe this is the technically correct description. The standard of installation is so bad on this particular property that we don’t believe that the three foreign sub-contractors who installed this system were certified installers, site communication was very poor due to language issues and they certainly weren’t managed during the process. However, we don’t want to mention the particular system that was used because we think this is probably irrelevant at this point. It is yet another perfectly good EWI system that has very poor site specific design and installation.

We have an update to this particular tale… 2 weeks after writing this blog and approximately 6 weeks after installation the system has developed its first moisture blister, we expect this to be the first of many but we’ll continue to monitor whilst the system designer provides a second technical report into the alleged reasons for failure. For some reason the first technical report was never made available and will never see the light of day though I suspect that may be due to our involvement.  We’ve inserted two images, one of the area where failure has occurred prior to application of the reinforcing mesh and topcoat and another of the finished render showing the moisture blister. 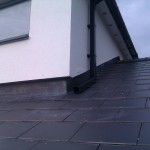 Moisture blister near base of downpipe. Note terrible edge detailing on render. 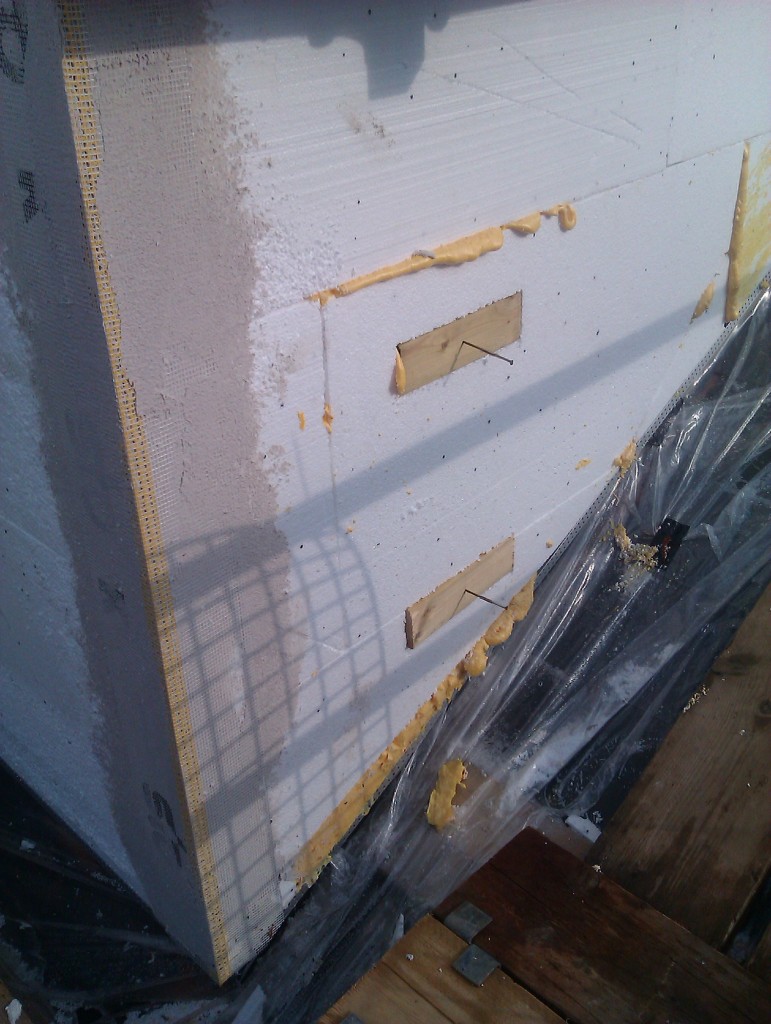