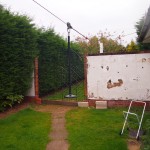 We’ve had to assess structural integrity of two freestanding walls recently, the first was relatively straightforward and involved a resident who reversed their car into the boundary wall surrounding his apartment block. The client wanted to know whether the wall was safe in its damaged condition. Since it was also a retaining wall and damage fell outside of acceptable limits, we recommended that it was taken down and rebuilt. It was a very easy & objective decision based on information outlined in BRE Good Building Guide GBG 13.

The second was a little more unusual and called for a more urgent and subjective opinion. As a surveyor, there are often grey areas that call for professional opinion. In this particular case we noted damage to a 2m high rendered free standing wall, it had failed at its junction with the corner of the main building and also had a long horizontal crack at a bed joint. Both the leaning wall and the degree of cracking are easy issues to assess but what made this assessment unusual was the installation of a large zip slide to the rear garden that ended at the garden wall. The steel support post was installed just beyond the garden wall. In fact the damaged render tended to indicate that that users of this feature were hitting the wall hard with the base of their feet as the zip slide came to a stop. Now you might expect that hitting the wall would cause it to lean away from the zip slide but in fact it had the opposite effect. Impacting against the wall caused failure along a slip plane near the wall base, 4 courses up from the floor. Essentially, there was almost  a complete horizontal fracture of the mortar bed joint.  Impacting against the wall appears to have caused counter rotation at the top of the wall so that it leaned towards the zip slide button seat rather than away from it.

You’ll see by the extract taken from BRE GBG13 that a decision to take down and rebuild was fairly straightforward since the wall in question had a full width horizontal crack exceeding 600mm in length. The lean was within acceptable limits. 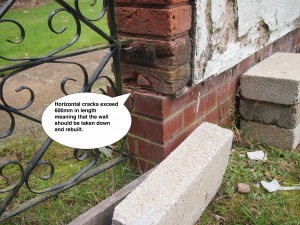 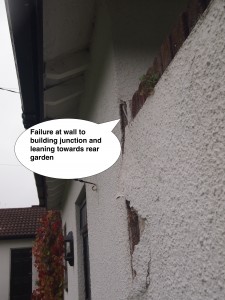 Fracture at Junction with Main Building

Where the matter becomes complicated is when assessing whether the wall presents any immediate danger to the occupants or general public that facilitates the requirement for immediate taking down to make safe. Had the zip slide not been present then we were satisfied that this wall presented no immediate danger but  the structurally unsound wall and a zip slide installation were a dangerous combination and we advised the occupants to not use the zip slide and further advised our client that the wall needed immediately taking down and rebuilding. Digging up and re-siting the steel support post for the zip slide so it is planted in front of, rather than behind, the rebuilt garden wall may prevent re-occurrence of future impact damage.