Floor Fails to Take the Load in Bovis New Build 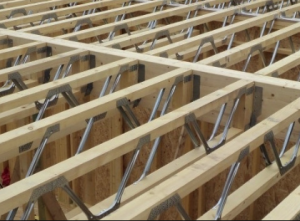 We carried out an inspection of a Bovis new build last week that was less than 2 years old and in buildings of this age you don’t expect to find structurally unsound composite floor joists in the floor but that is precisely what we did find.

We noted a number of defects to the first floor all centred on the landing area between three bedroom access doors and the airing cupboard.

We noted a large run out to the base of a bedroom door but checking the door showed it to be square, whereas the floor to the landing area was sloped significantly. 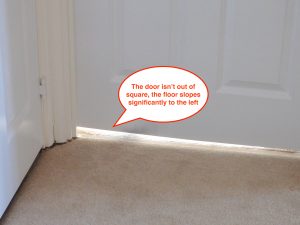 Moreover, we noted large gaps to the base of the bedroom door frames, which were so large that we could see where the nails in the sole plate had pulled from the floor as the floor had sank.

We then found that the dividing wall between the bedroom and airing cupboard could actually be rocked from side to side, and of course this movement explained why a number of cracks had opened up to skirting boards and door architraves.

We’ve inspected properties on this site before so we are intimately familiar with the construction and poor build quality so we know that the floors are constructed using composite I beams, which are then overlaid with tongue and grooved chipboard. 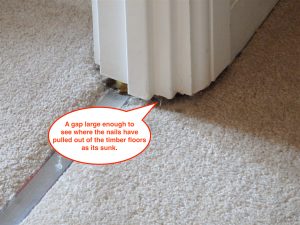 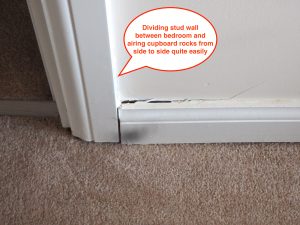 In this particular case  the range of defects led to one very obvious and significant conclusion, the floor was failing under the weight of the Megaflo hot water cylinder in the airing cupboard. The cylinder was not sat on a plinth and we are of the opinion that the floor was not strengthened in any way to take the significant  weight of this live load, which could be in the region of 350Kg’s.

As expected we also noted that the kitchen ceiling below was showing evidence of bowing under the live load and we have to wonder how many more properties on this new development will suffer from the same problem? 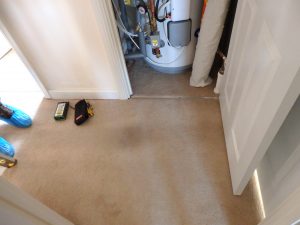 Floor sinking under the load of the Megaflo cylinder