We were recently appointed by a contractor to resolve a dispute between him and his client. 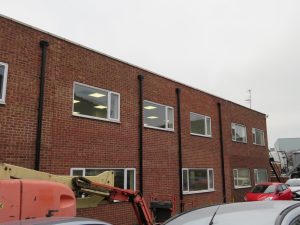 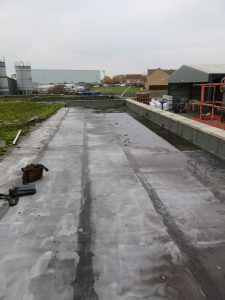 The roof was circa 300 square metres, and the new section of roof accounted for approximately 25% of the total roof area.

On accessing the roof, we noted a number of defects to the new section of roof, which included: 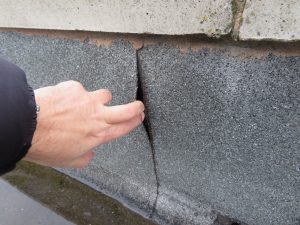 Given the wide range of defects, it was clear that the new section of roof was not fit for purpose. There were numerous areas that could allow water ingress. So should we have stopped the investigation there?

In simple terms, no! In my view, that would have been irresponsible and not in the best interests of either party. 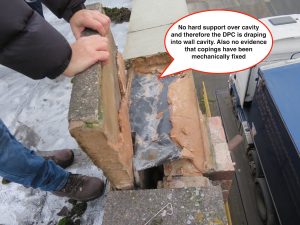 It was immediately apparent that the existing flat roof was as dilapidated as we’ve ever seen and was long overdue replacement. To my mind it simply wasn’t sensible to attempt connecting a new flat roof system to such a heavily damaged existing roof deck. Even if the new section of roofing had been constructed to a good standard, to my mind, there was always going to be a dispute relating to water ingress and who was responsible. If the existing roof felt was leaking, then water could easily find its way under the new section of roofing; either by direct flow, saturation of the roofing boards, or vapour transfer. 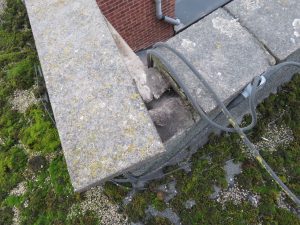 We noted a wide range of substantial defects to the existing roof, which included:

A focus had been placed on the poor falls in the new section of roofing, and yes, these were poor, but so were the falls to the existing section of roof. Neither issue could be addressed without replacement of the whole roof. I did have some sympathy with the flat roofing sub-contractor, because it was impossible to effectively correct the falls on such a limited area of the roofing. 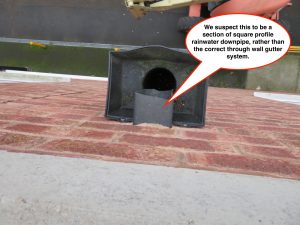 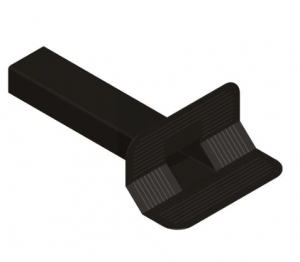 My advice to both parties is that this roof should be wholly repaired, with the owner being responsible for the existing sections of roof, and the contractor being responsible for his defective workmanship. Once the roof was stripped, and roofing boards renewed (as necessary), then falls should be corrected by the use of timber firring strips under the roof boards, or by installing tapered insulation, installed on top of the roofing boards. 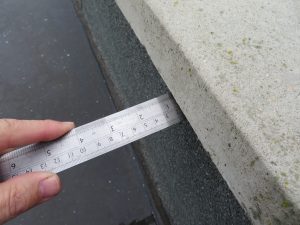 Additionally, extensive works were required to the parapet walls. which included:

Should Coping Stones Be Mechanically Fixed?

In 2014, BS5534 was changed to make the requirement that ridge tiles must now be mechanically fixed. It is no longer allowable for these tiles to simply be adhesively bonded on a bed of mortar. One might think that this requirement was extended to cover coping stones, but unfortunately it wasn’t.

However, BS5642:2, makes the following statement;

“The coping system should be designed to resist impact by displacement or pressure of ladders, or by normal wind conditions.”

Since a mortar bed alone, would not resist displacement, then clearly parapet copings should be mechanically fixed. The standard then goes on to state that clamps and fixings for copings should be of Austenitic stainless steel construction.

We also advised that the box gutter should be modified to have bespoke, ‘through wall’ outlets installed. This would make it far simpler to bond the torch on felt to the upstands, and also, those upstands, should themselves be protected at their head by a lead apron flashing. There is a fashion now for omitting these lead aprons, and simply expecting the torch on felt to fully water proof the upstand, but in my view, premature failure will always occur with this type of detailing. Occasionally the felt is turned under the coping stones, to also act the the parapet wall DPC, but again, this detailing is incorrect, and not fit for purpose. 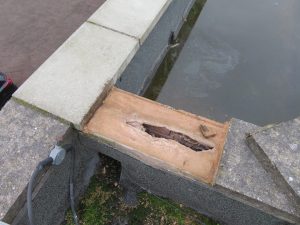 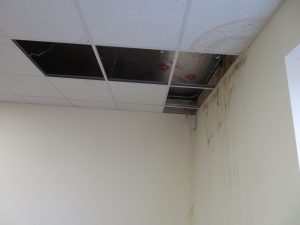 I personally found it hard to believe, that the existing section of flat roofing was not also leaking, but it is a certainty, that the parapet walls were! Pragmatically, it was important that both parties addressed this problem with whole renewal of this roof, or I’m confident that the water ingress will be an ongoing issue.