Possibly the best material you could have on your roof. 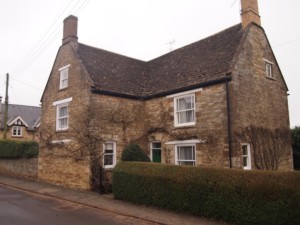 We do a lot of conservation and heritage work and we surveyed another old grade 2 listed historic building this week, which was particularly fascinating for its roof covering of Collyweston stone slate. Indeed, the roofing material is probably at least partially responsible for the buildings grade 2 listing. Walls  to this building were  circa 500mm thick, with the original part of the building being around 400 years old and constructed of random rubble limestone. Collyweston stone slate gets its  name from the village in Northamptonshire, which is where these slates are made and it is a  material whose use is generally restricted to areas running along the limestone belt so can be found in Northamptonshire, South Lincs, Rutland and Cambridgeshire; the property in question is in Rutland. Collyweston stone slating has never been a large industry but it is now extremely rare and we believe that there are only two roofing businesses operating that specialise in this material.

Collyweston slate is not actually slate, in fact it is limestone dating from the jurassic period that splits naturally along its bedding plane to form slates. Making these stone slates is incredibly labour intensive and skilful. In the 19th century the process was known as ‘foxing’ and involved a miner laying on his side and tapping away at the overhead seam with foxing picks. At some point the overhead seam would fall and miners would build up temporary supports for the seam using columns of waste stone. If the seam did not fall by the days end then a ‘lions tail’ would be used to lever the seam down; it would hopefully smash into manageable pieces when it hit the floor and hopefully not land on a miner. These pieces were known as ‘logs’ and it was important for the logs to remain damp because they were then left out in the open on a bed of shale so that freeze/thaw action could initiate splitting of the log into slates. 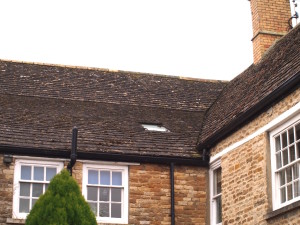 Even today, slaters rely on frost to split the log. Slates are dressed into various sizes and when you view a Colllyweston slate roof you’ll immediately notice that the slates are laid in diminishing courses towards the roof peak. To accomplish this, the  underlying timber laths, usually 0.75″ x 0.75″ sections are also laid in diminishing courses. They may be spaced at around 6″s near the eaves slate and decrease to a lath spacing of around 2.75″ near the roof peak. The slates are secured with oak pegs fixed through a hole in the head of the slate. These days the hole is drilled but traditionally they were made with a bill and elves.

Incredibly, Collyweston stone slates are capable of almost continuous reuse, which makes them possibly the cheapest roof covering you can buy if you calculate life cycle, rather than upfront costs. It is the oak pegs or underlying timber laths that are likely to be the weak link so for very old roofing it is not unusual to have to strip and relay the roof to renew oak pegs or laths. This roof was stripped and relaid around 1989 but all the slate was reused. 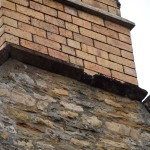 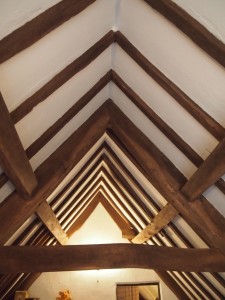 As you can imagine, there is substantial weight in a Collyweston stone slate roof so the underlying timber frame has to be substantial and you will generally find an impressive and substantial oak frame taking the load, as can be seen in this case. 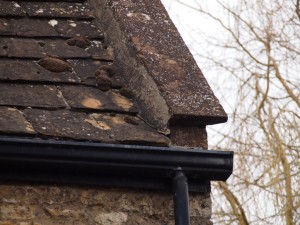 There was very little wrong with this roof, bar the heavy erosion seen to the edges of some limestone parapet wall copings and the fact that the base of the chimneystacks and parapet walls flashings had been filleted with OPC mortar. We’d have preferred that NHL 5 lime mortar was used but since both the slates and the parapet walls are limestone then there is little cause to worry about differential expansion and subsequent cracking to the mortar fillets.  The fillets were in remarkably sound condition and generally where we encounter OPC mortar fillet roof flashings, they have generally cracked or failed altogether.  After some relatively minor repair work to the parapet copings and occasional ongoing maintenance work, we feel pretty sure that the roof will be good for another 400 years.

As a postscript to this piece, I noticed that it was found and retweeted by the last company still mining Colllyweston stone slate, Claude N Smith & Co. That in turn led me to one of their Youtube videos, which is absolutely fascinating if you can spare a few minutes to watch. Mining Collyweston Slate